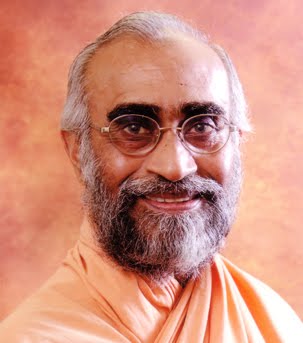 Swami Yogeshwarananda instructs spiritual seekers in mystical knowledge and the wisdom teachings. He is a hermit monk of the ancient Advaita Vedanta order of India.

Often living in a cave during the summer at an altitude of 10,000 feet at Gangotri, near the source of the river Ganges, Swami Yogeshwarananda has led a deeply contemplative life since the 1960s. He spent many years in systematic study of the ancient Sanskrit scriptures from scholarly monks. He followed the tradition of monks, living an austere life in a hut at the foothills of the Himalayas. The Swami has delivered lectures in many countries including Australia, Switzerland, Germany, United Kingdom, and the United States.
The Swami translates the essence of ancient scriptural teachings in ways we can understand and live by it today. Access to this knowledge, and how to apply it in our daily lives, is the gift this Swami brings us. Those who listen and learn, gain great benefit.


Click for Flier of Lecture Series
Locations of Talks